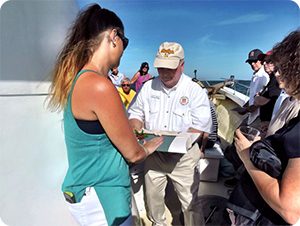 One family member just loved to walk on the beach.

Another told relatives he had the best time of his life sport fishing in Fort Lauderdale. Another made sure her children and grandchildren gathered each year for a family reunion in the Outer Banks of North Carolina.

Before hundreds of voyages, family members described various heartfelt reasons they brought their beloved’s ashes to be scattered at sea.

“They’d like to bring their loved one back to where they had their fondest memories, and that’s what we see all the time,” said Capt. Brad White, owner of New England Burials at Sea LLC.

A mariner since age 12 who grew up on Boston’s south shore, White embarked on a career as a businessman before deciding to pack up his desk not long after a friend asked him to scatter his uncle’s ashes while he was out at sea.

That request was followed by another and then by dozens, and White eventually traded his corporate business cards for a mariner’s cap.

“I just got tired of the board room. I turned the ocean into my office and I haven’t looked back,” said White, 57, a U.S. Coast Guard Licensed Master Captain whose company now serves families on the east and west coasts of the U.S.

His vessels typically bring funeral parties of between six and 25 passengers out to sea to bid a final farewell to loved ones – people with an enduring love for the ocean their families never forgot.

“In America, there are 175 million Americans that live within 10 miles of the water. There is a huge gravitational pull to come home when somebody passes away,” White said.

A voyage brings the group out at least three nautical miles, where family members can scatter ashes on the outbound tide. The ashes are accompanied by flower petals and the ceremonies can include an eight bell “end of watch” blessing and a cannon salute.

Guests on ocean burial trips see a variety of life on the way – from gray and humpback whales to sea turtles eight-feet wide. Tuna fish, sharks, seals and a variety of birds often show up too.

It’s a moving experience, White said, when families on a funeral voyage witness dolphins “dancing in the water.”

These experiences provides guests with a better understanding of their family member’s love for the ocean.

Often, White said a scattering ceremony will take place within view of a lighthouse that serves as a marker where family and friends can look to as they gaze out at the sea and remember their loved one.

“They travel the world forever with the ocean currents and with incredible wildlife. That fulfills part of the decedent’s last wish,” White said. 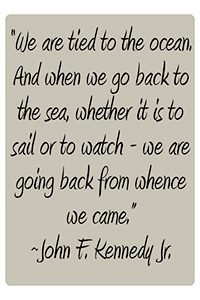 For many, “that far outweighs visiting a columbarium or a family gravesite,” he said.

There are those who prefer not to go out on a boat – but that doesn’t mean they can’t get their loved one’s ashes out to sea, White said.

“They rely on us to scatter their loved one in a photo-documented manner,” White said. These families receive photographs and a video of the ceremony created during the trip.

Families of Navy veterans – and other branches of the military – often seek out a sea burial for their beloved, he said.

“Much like a farmer wanting to be scattered over his cornfields, maritime military personnel … they’d like to be back where they spent their career,” White said.

For White, whose memories of the sea extend back more than 40 years, there is no other final resting place.

“I am absolutely going to be part of the sea again,” White said.

“We are tied to the ocean. And when we go back to the sea, whether it is to sail or to watch – we are going back from whence we came.”