New England Burials at Sea is featured on the front page of the Boston Globe today!

Click here to see the article with video online at www.Boston.com

Text of Article is Below:

Waves gently slapped the sides of the boat as Nancy Mastrangelo’s children and grandchildren, bundled against the mid-December chill, knelt on the bow one at a time to drop handfuls of her ashes into Massachusetts Bay. After leading them in prayer, Captain Brad White rang a bell eight times to mark her passing.

Mastrangelo, 78, an East Boston native who loved the beach, died the week before, after a battle with cancer — just a few months after her husband’s ashes were scattered at sea.

“She wanted to be with him,’’ said her daughter Wendi Mastrangelo of Sudbury.

The Mastrangelos are among a growing number of people choosing to have their cremated remains, or even their bodies, released into the sea — rather than having them buried in a cemetery or spending eternity in an urn. The local office of the Environmental Protection Agency received 70 filings for New England burials at sea last year, up from just five in 2005.

“They would rather the ashes be free versus locked up,’’ said Tiffany Chan, the manager of Wing Fook Funeral Home in Roxbury.

The trend follows an increasing preference for cremations over burials. Nearly 40 percent of deaths resulted in cremations in 2009, according to the Cremation Associa tion of North America, double the amount in 1985 — a rise that some in the funeral business attribute to the green movement. The figure is expected to grow to nearly 60 percent in the next 15 years. And companies such as Captain White’s New England Burials at Sea LLC are catering to those who also have an affinity for the ocean.

Burying a loved one at sea privately doesn’t require a special permit, but those who charge to take people out for ocean burials need to have a Coast Guard captain’s license, said David Morin, who runs A Burial at Sea out of Narragansett Bay. In either situation, a report must be filed with the EPA within 30 days. Cremated remains have to be taken out at least 3 miles from land, and full bodies also must be deposited in water at least 600 feet deep, which can mean going out 25 miles or more.

Funeral directors accompany services for full bodies, which are weighted down to keep them on the ocean floor until they decompose. This prevents incidents like the time a body that was buried at sea got caught in a fishing net off the coast of Chatham several years ago. Some protected areas, such as Buzzards Bay, are off limits completely.

The people who perform official burials at sea aim to give the deceased a dignified send-off. “I’ve heard stories of people throwing [ashes] off the Block Island Ferry and coating everybody on the boat,’’ said Morin.

Having someone who knows how far out to go helps, too. “Swimmers obviously don’t want to see grandpa come floating by,’’ said Morin, who charges $700 to take up to six people out to scatter remains of a loved one off his 35-foot yacht.

White began his Marshfield Hills-based company — the biggest such business in New England — in 2006, when the trend was in its infancy. He had just received his captain’s license to take people on sightseeing and fishing trips when he got a request to scatter someone’s ashes and realized there was a market for burials at sea.

White now has 28 boats from Maine to Florida and conducts up to 10 services a week up and down the east and west coasts. White also buries cremated remains off the coast of Florida in concrete structures called Great Burial Reefs, and he’s planning two more 20-acre burial grounds off Maryland and Cape Cod. 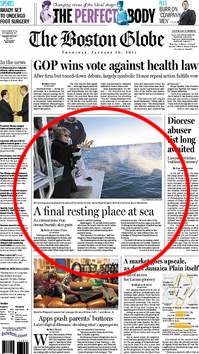 “The growth potential is exponential, it really truly is,’’ said White, whose family first got into the funeral business in the early 1900s when his grandfather and great-uncles in Quincy had their morning milk delivery Clydesdale horses start pulling hearses in the afternoon. As a high schooler, White used to pick up bodies at Logan Airport before football practice in Braintree and deliver them to funeral homes.

For families that have lost loved ones, scattering cremated remains at sea can be an affordable way to go, ranging from a few hundred dollars for an unattended service to several thousand for a more elaborate service with flowers, a DJ, and other extras. A cemetery burial, on the other hand, costs about $7,000. Still, some people spare no expense. White once conducted a $60,000 service for 275 guests, complete with transportation to and from the boat, a bagpiper, a full meal of rib roast and shrimp, and an open bar.

Many people choose to add personal touches such as pictures or favorite foods to the service at sea.

In August, on the day after what would have been their 59th wedding anniversary, the family of Jeanne and Andy Forti went out into Plymouth Harbor at sunset and toasted the Saugus natives — a jar of white Zinfandel for mom and a martini with two olives for dad. Jeanne died at age 80, five years after her husband, and had told the family, “When my time comes, stick us both out at sea,’’ said daughter JoAnn McDade.

After the toast, the family tipped the bean pots holding the couple’s remains into the water and watched the current slowly take them away. “You’re off and you’re traveling the world now, together,’’ said McDade, whose family paid New England Burials at Sea about $2,500 for the ceremony.

White has conducted only a handful of full-body burials, which start at $9,000 for the service and biodegradable burial shroud, but has arrangements pending for dozens more.

Bob Kimball, who has prostate cancer, is among them.

Kimball, 62, lives and swims at the harbor in Winthrop, and he knows when his time comes, he wants his body committed to the deep.

Kimball has already been fitted for his shroud; it will be cream-colored, so family members can write farewell messages on it, and decorated with American flags.

“You have dirt, you have fire, and you have water, and out of those three the most appealing to me and the most comforting was the water,’’ said Kimball. “I always tell people that the ocean and the water is my mistress. It’s where I want to go.’’

Watching a loved one’s body slip into the abyss can be difficult, however.

Robin Tacelosky’s husband, Michael, who repaired boats for a living in Maryland, always knew he wanted his body buried at sea. So she honored his wishes, complete with music by the Grateful Dead, despite the fact that some people weren’t comfortable with it.

“It was extremely hard,’’ she said. “There were some family members that did not want to attend.’’

Out in the bay near Boston Light, White told Nancy’s Mastrangelo’s family members about the path her ashes would take, circling from Newfoundland, Europe, Africa, the Caribbean, and back up the East Coast.

Forty-five minutes after the boat dropped anchor, the driver slowly circled the field of floating flowers and headed back to port.

Katie Johnston Chase can be reached at johnstonchase@globe.com.