The following was originally published on February 24, 2015 on the blog:
FINISHING TOUCHES:
Customized Event Planning for Distinctive Proceedings Following Death

Journey Journal, Marshfield Hills, Massachusetts
The ocean has its silent caves,
Deep, quiet and alone;
Though there be fury on the waves,
Beneath them there is none

… peaceful sleep is ever there,
Beneath the dark blue waves.

Excerpts from “The Ocean” by Nathaniel Hawthorne

TIDAL GRAVES
For immersion in a meeting with a company representative to glean details about New England Burials At Sea (NEBAS), one might expect to see water. But in this case, within the confines of a hotel lobby, the only water in the near vicinity emanated from the young hospitality apprentice manning the front desk who was still wet behind the ears.
Photo illustrations of this enterprise must be limited to the company’s website postings, as relevant “Kodak moments” were unavailable during this meeting in a hotel.

Rather than at headquarters in Marshfield Hills on the continental coast, Dennisport on Cape Cod was the location for conveyance of introductory enlightenment. At the time of this afternoon interaction with an appointed representative, the company’s owner was on his way to San Diego. The next day he would host a cruise to submerge a group of funeral directors in the concept and conduct of sea burials for expansion of operations in Pacific waters.

Captain Brad White, the originator of this business that was baptized in 2006, has not only managed to stay afloat, but has ridden the swelling waves of expansion during the ensuing years. Services are provided from Maine to Florida on the east coast and through an affiliation with the scattering company, Ashes On the Sea, on the west coast from San Diego to San Francisco.

There is no shortage of seafaring operations established specifically for scattering missions. This one, though primarily engaged in disposition of cremated remains, also conducts eco-friendly, whole body burials on a regular basis.
Most often, families and friends are on board for scattering and burial missions. Only about ten percent are unattended. There is a full menu of options from which they can select, determined fundamentally by the degree of involvement desired and the number of people who will participate; variations are available, including an unattended scattering with a ship-to-shore conference call enabling up to four family members to listen to the ceremony from a location on land. Both unattended and attended year-round memorial cruises are available for disposition of either cremated remains or bodies.

Boats vary in size; for up to fifty passengers, one that is thirty to sixty-five feet long is used, but for larger groups of up to four hundred people, vessels up to one hundred and twenty-five feet are employed.  The company has access to over forty-six boats around the country, which deploy from multiple ports.

Excursions typically last about two hours for scatterings and longer for whole body burials.  In compliance with regulations established by the EPA, which oversees burials in American waters, cremated remains must be scattered at least three nautical miles off shore, whether deposited directly or in an aquatic type of biodegradable urn.

Bodily burials must take place in at least six hundred feet of water, which can be reached at about twenty-five to thirty miles from a northeastern port, but may be farther out – thirty-five to ninety miles – in other areas.

Instead of traditional wooden or steel caskets necessitating modification as required by the EPA and entailing additional expense, use of a locally hand sewn, company trademarked ocean-friendly burial shroud is encouraged as an eco-friendly alternative. This Atlantic and Pacific Sea Burial Shroud that’s made of canvas and sailcloth has zippered access and is carried with ropes. It biodegrades in three to six months. Families may write messages on the canvas and a picture of the decedent may be slipped into a transparent pocket on top of the shroud. A chamber separate from the body contains four oversized cannon balls weighing almost forty pounds each; a federal regulation mandates at least one hundred and fifty pounds of additional weight to assure sinkage and stability on the ocean floor.

The rate of decomposition varies, depending on the ocean depth and temperature, as well as the population and hunger of sea creatures scavenging for nourishment in that spot.  Once the body has been utilized for fish food and the shroud biodegrades – presumably in ninety to one hundred and eighty days – the canon balls serve as artificial reefs that attract marine life.  In contrast to a body anchored at the bottom of the sea, cremated remains generally become part of warm ocean currents propelling them in perpetual motion.

In concert with an intention to minimize environmental impact, embalming is avoided – unlike the protocol for sea burials provided by the Navy to qualified veterans as part of regular missions.  Another difference is the distance for a body to be delivered into the waters, ordinarily sliding about a foot down over the side of a boat in contrast to plummeting ten stories from a military carrier. 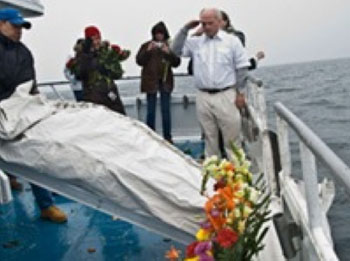 A funeral director must be on board to oversee custody and disposition of a body, but does not need to be present for a scattering event.  Once participating funeral directors have been apprised of company protocols and practices, the company certifies them to manage preliminaries for this form of disposition.

The boat captain officiates for ceremonial purposes unless a family chooses to have a clergy member or other representative serve in that role.  Proceedings can be varied according to wishes for particular readings, poems, tribute videos, or other commemorative elements.  The boat may circle over the spot of a body’s deployment into the water, often defined by flowers floating above it, in conjunction with a canon salute. 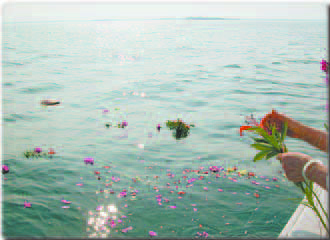 In nautical history, the sounding of eight bells rung after a sailor had died indicated the end of one’s watch at sea and the beginning of another. This ritual, identified as an “Eight Bells End-of-Watch Blessing,” is one of many optional “bells and whistles” available to embellish the memorial experience.  A common practice is the tossing of a single flower, rose petals, or an easily biodegradable wreath. 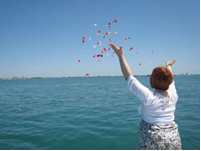 Some others include a military honor guard, musical additions, such as a bugler, bagpiper in authentic garb, or use of a portable sound system, photography packages, and Internet simulcasting. 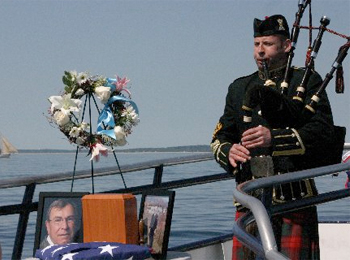 Everyone onboard is encouraged to participate, often taking turns tossing a portion of the cremated remains.

The boat’s engine may be shut down for moments of quiet reflection, enabling folks to drink in the surroundings and douse their senses in the sounds of winds and waves as well as the sight of gliding birds, bounding whales, cavorting seals, and whichever other creatures may happen to pass by.

A memorial voyage can be more than a mission and often is garnished with catered food.  In fact, the tide may turn once remains have been consigned to their aquatic grave, perhaps even transforming a tsunami of tears and an undercurrent of sorrow into billows of social interaction.

For anyone who wishes to mark one’s journey into the wild blue yonder by taking flight before submerging in the deep blue sea, the enterprise offers scattering over the sea by air – at points between New Jersey and Maine, via vintage airplanes.

Through “geo-targeting,” cremated substance can be scattered within a relatively small area.  Though family members are not able to accompany remains, the captain can conduct a brief maritime ceremony on the tarmac beforehand.  They can then witness the scattering from a nearby boat or land location or may be flown in a different aircraft alongside the plane to watch it close up.  Folks observing from a distance will see the plane’s wings dip in a final salute and through radio contact will hear the pilot read a final prayer.

Regardless of the manner in which remains in any form are “laid to rest” under the auspices of this enterprise, after each event a family is given a certificate noting the navigational coordinates (latitudinal and longitudinal location) for future reference.

Multiple varieties of souvenirs are available for purchase to mark the occasion.  Concierge services can be tapped for assistance with lodging, dining, and transportation arrangements.  Pet remains can be handled in like manner as well.

As cemeteries become saturated with underground occupants and mausoleum structures keep popping up to expand their offerings, a sea of opportunity awaits.

Since water is so predominate both as a symbol and as an agent, its growing appeal as a final resting place is not surprising.  For someone whose occupation, hobbies, vacations, or dreams have led to an aqueous milieu during life, burial of one’s physical residuals in a similar setting may be particularly apropos.  But for others, the lure of a final splashdown to the ocean floor may simply be motivated by an urge to return to an environment reminiscent of amniotic bliss.