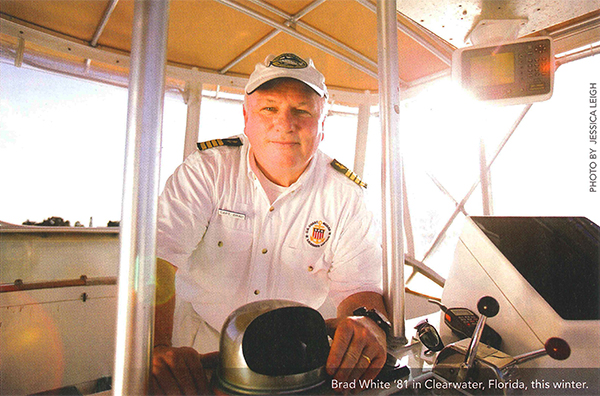 After 12 years of selling biometric desk blotters, wristwatches and massage chairs, Brad White ’81 had reached the top tier of management at the Sharper Image Corporation. As director of worldwide business development, he was opening stores from South Korea to Saudi Arabia, launching Internet sales, and helping revenue for his division grow by $60 million. But something was missing: White wanted to market his own products and spend his time earning money for himself, on his own terms.

“I was working my tail off to make hundreds of millions of dollars for the company, whereas I could exert the same effort and energy establishing my own brand with my accrued marketing skills,” White says.

So in 2006, White, a longtime yachtsman, founded New England Burials at Sea. I left the “boardroom for the ocean”, he says, “and haven’t looked back.”

“Most Americans change careers three or more times in their lifetime, a number that is that the average person stays in the same job only 4.6 years. Gone are the days when people worked for the same company for 30 years. Organizations are less loyal and workers today need to be much more flexible, which means they need to tal<e on many different roles in their career,” says John Bradac, career services director at Ithaca College. For IC alumni who have reinvented themselves, their new careers often stem from interests that emerged in childhood but were left unfulfilled. They report that returning to their earliest passions was unexpectedly gratifying as they stepped off their career tracks and discovered new ways to use their skills. In his sophomore year at IC, Brad White ’81 took a course that would one day lead to a sea change in his career. Exposing students to end-of-life issues, the course-Death and Dying-featured a tour of an Ithaca funeral home. When the professor of the class, Jules Burgevin, asked his students to touch a casketed corpse to show that death was real, White didn’t flinch. After all, he and his brothers had spent years visiting his uncle’s funeral home, and as early as the fifth grade, he thought he might become an undertaker as well. Throughout high school, he had worked for another funeral home outside Boston, transporting the deceased in a hearse, working calling hours, and setting up the flower stands for the services. But he did learn something else from his professor: Jules was the “first inspiration for me to think about how to market death,” White says.

White’s plan to work as an undertaker took a backseat to an opportunity in the retail industry after he graduated from college. Twenty-seven years later, having left the Sharper Image, White was leading fishing charters for bluefin tun off the Massachusetts coast when one of his customers asked him to scatter his uncle’s cremated ashes. As the number of requests multiplied, New England Burials at Sea took off as a business.

“I liked the business model [because it] really didn’t exist,” White recalls. “There was no inventory and you could dazzle customers with white-glove service.”

So far that approach has worked. In 2014, his company, based in Marshfield Hills, Massachusetts, conducted more than 300 funerals, and White expects that number to grow to about 1,000 within three years. This past spring, he began serving client families along the California coast in addition to offering at-sea burials in ports from Maine to Miami. Though he has five captains on staff, White still conducts some of the sea burials himself.

The remains – whether cremated or intact – are always interred at least three miles offshore (the legal limit), after which white rose petals are strewn on the water, an eight-star yacht flag is raised, and an authentic cannon is fired in salute.

Becasue orhcestrating a burial as sea that will satisfy all familiy members acan be straessful, White tries to add a touch of humer to help his client families get through their time of grief.

“I sometimes sign my letters’Eventually yours,’ or ‘I’ll be the last to let you down,’ he says. “So there is some whimsy and comedy with one’s last wish. People like that levity.”