The diversity of Buddhism is evident around the world as philosophical, cultural, regional and language transformations continue to awaken so many from suffering and anxiety.

Cremation is a purification process after death. As Buddha himself was cremated, and his remains divided eight ways, a greater variety of memorialization could be attained with the body returning to the four elements: earth, water, air and fire. Water burials release the soul of the deceased back into the world while the preparing for reincarnation. Those seeking enlightenment act wisely and should not follow anything blindly. Buddhists are rarely buried directly in the earth.

Buddhists regard death as a manifestation of the Buddha’s beliefs in impermanence.

Japanese Buddhist funerals traditionally last for about one hour and fifteen minutes and have a prayer service at a funeral home. A eulogy is usually read.

Cambodian, Sri Lankan, and Thai Buddhists have up to three forty-five minute ceremonies over several days.

The first, held within two days of death at a home of the immediate family

The second is held within two to five days after death, often in a funeral home with the service conducted by one or more monks.

The third ceremony, called the ‘merit transference’, is held seven days after death. Family members radiate their loving kindness directly to the deceased. By doing meritorious deeds, they can transfer the merits to their beloved ones for their well-being. It is customary that the people who attend the funeral bow and see the body in the casket as a sign of appreciation for its lessons regarding impermanence. The monks then lead the ceremony from the family home or temple after burial or cremation as a closing procession. The monks may also attend the sea burial or ash scattering.

The final ceremony, when performed upon the impermanent sea, offers an atmosphere of togetherness in a world of random events. One considers the interaction of the living and the dead while deciding upon meritorious deeds to perform in their memory, to perpetuate and honor the names of the departed ones. The departed, from their state of happiness, then reciprocate their blessings upon living relatives.

The sea, as a medium of life, death, rebirth and eternality, is the ultimate earthly destination, the “distant main” to which flow all things until such time as they are reborn in another form or element. 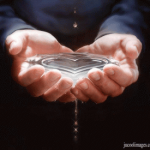